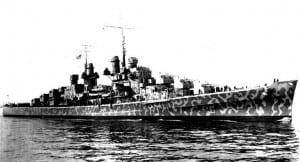 As James Hornfischer states in his book Neptune’s Inferno (The U.S. Navy at Guadalcanal) “On that night, two groups of powerful steel machines surprised each other on the sea in the dark and, blundering and veering in a manner unworthy of the elegance of their design, grappled bodily, delivering hammer blows until death.”

When dawn broke on that Friday morning, the daylight showed broken ships and broken men.

The Death of the Juneau

At approximately 11 am the morning of the 13th, the surviving ships of Callaghan’s Task Group 67.4 were limping slowly back to the safety of Espiritu Santo when “a bridge lookout on the USS San Francisco pointed out no fewer than four wakes approaching the ship’s port bow.”(1)

The Commander ordered evasive action. Three of the torpedoes missed. “Joseph Whitt …. gathered himself quickly and looked forward to find the wake. The torpedo passed under the San Francisco on the starboard side. He found himself looking directly at the Juneau.”(2)

“Even after the unprecedented blooding of the previous night, never had anyone witnessed a blast such as this. “The Juneau didn’t sink – she blew up with all the fury of an erupting volcano. There was only a terrific thunderclap and a plume of white water that was blotted out by a huge brown hemisphere a thousand yards across, from within which came the sounds of more explosions.”(3) 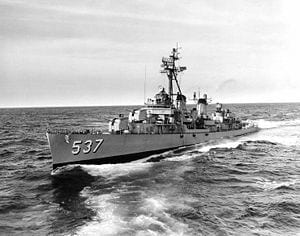 The sinking of the Juneau became one of the worst tragedies in U.S Naval history. Of the almost 700 crewmen aboard, only 10 survived. Among the casualties were 5 brothers: George, Francis, Joseph, Madison, and Albert Sullivan.

On April 4, 1943, Bethlehem Shipyard launched the USS THE SULLIVANS (DD537) in their honor. Sporting the Shamrock of Ireland on her forward stack, the ship sailed into World War II with 23 crew members named Sullivan.

On Wednesday, November 13, 2013, clips from the 1944 movie “The Fighting Sullivans” will be shown that include interviews with the survivors, FDR, and the family from Iowa.  Historic photographs will be on display of the USS Juneau and the USS San Francisco which were both involved in the battle.  Come learn the backstory of the Naval Battle of Guadalcanal and hear about Bethlehem Shipyard’s contribution to the Sullivans’ memory.